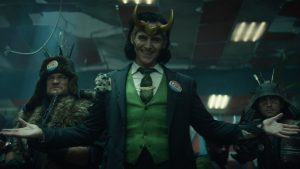 Marvel Studios has been busy and Disney+ is the likely destination for nearly all big properties within the famed MCU. Now the their next series in the television lineup is Loki, the first full trailer is upon us. This trailer comes on the heels of a teaser promoting the Marvel Cinematic Universe series, that was announced in December.

The official logline:  Loki—the imperious God of Mischief—who, after absconding with the Tesseract, is a fish-out-of-water when he lands in a world of trouble with the bureaucratic TVA (Time Variance Authority).

Loki, will be the third powerhouse MCU Disney+ series, following WandaVision and The Falcon and the Winter Soldier, both of which are popular in the world of spinoffs and genre series. The release comes the same month as Black Widow, MCU’s next big-screen blockbuster.

Watch the Loki trailer below: