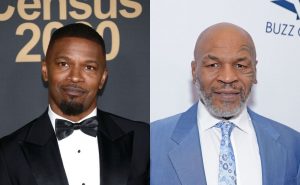 Here we go, Mike Tyson’s authorized limited series is coming and Jamie Foxx will executive produce and star as Iron Mike Tyson, himself. The high profile project, which has been in development for several years, will be announced as a limited series instead of a feature film.

Tyson, will be directed and executive produced by Antoine Fuqua, will tell the life of the controversial but iconic boxer. Colin Preston is writing the series and legendary filmmaker Martin Scorsese, will serve as executive producer under his banner Sikelia Productions. Rick Yorn, Ian Montone, Chuck Pacheco and James Barnett will also executive produce for LBI Entertainment. For Mike Tyson’s Legends Only League he will executive with Kiki Tyson, along with Sophie Watts and John Ryan Jr.. The League’s Azim Spicer will associate produce.

In a statement, Tyson said he has been waiting to tell his life story the right way to his audience and fan. “I have been looking to tell my story for quite some time,” he said. “With the recent launch of Legends Only League and the excitement from fans following my return to the ring, now feels like the perfect moment. I look forward to collaborating with Martin, Antoine, Jamie, and the entire creative team to bring audiences a series that not only captures my professional and personal journey but also inspires and entertains.”

This announcement was delivered as Hulu has greenlit an unauthorized 8-episode scripted limited series, Iron Mike. This competing series is from the I, Tonya, team starring Margot Robbie. Tyson is adamantly and publicly against the Hulu project.

Back in February, the champ said, “Hulu’s announcement to do an unauthorized miniseries of my life, although unfortunate, isn’t surprising. This announcement on the heels of social disparities in our country is a prime example of how Hulu’s corporate greed led to this tone-deaf cultural misappropriation of my life story. To make this announcement during Black History Month only confirms Hulu’s concern for dollars over respect for Black story rights. Hollywood needs to be more sensitive to Black experiences especially after all that has transpired in 2020. My authorized story is in development and will be announced in coming days.”