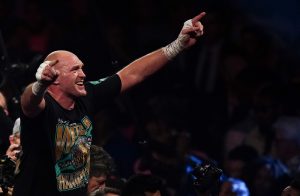 A big fight is on the way this summer. ESPN reports Saudia Arabia will host the world heavyweight boxing title-unification fight between Tyson Fury and Anthony Joshua this August.

“It’s the same people we did the deal with for Andy Ruiz; that event was spectacular. As partners they were fantastic as well.”

The two boxing stars signed a two-fight deal for the titles this past March.

The post Tyson Fury-Anthony Joshua Fight Gets Target Date in August appeared first on The Source.