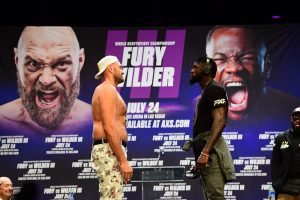 The Tyson Fury and Deontay Wilder trilogy fight set for July 24 will be pushed back. Heavyweight champion Tyson Fury has tested positive for COVID-19, changing the fight date to later this year.

The fight between Fury and Wilder was set for July 24 in Las Vegas, with showings on FOX and ESPN+ pay-per-view. The new target date for the fight is October 9 according to ESPN and will once again be at T-Mobile Arena.

Multiple members of Fury’s camp have tested positive and now he will return to England.

The third fight was set after a December 2018 draw, followed by a February 2020 seventh-round stoppage. Neither man has released a comment about the postponement.