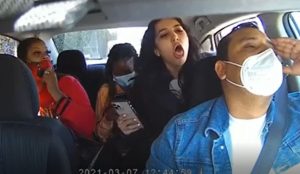 The customer is usually right, but Uber and Lyft ban passengers who are dead wrong.

The San Francisco Police Department is investigating an incident where the driver canceled the ride because the three passengers refused to wear a mask, then one of them assaulted him and tried to steal his phone.

“An altercation occurred and a second passenger reached over the driver’s seat (from the rear seat area) and stole the driver’s cellphone from his hands,” police said.

“The suspects exited the car and the third passenger reached into an open window and sprayed what is believed to be pepper spray into the vehicle and towards the driver. The suspects fled the scene.”

Uber introduced a ‘No Mask, No Ride’ policy in May 2020 in response to the ongoing COVID-19 pandemic, which every rider has to agree to before a ride is connected. However, in the video below you can see two mask-less passengers coughing in the driver’s direction and shouting profanities at him.

As a result, Uber placed a ban on this disruptive passenger and Lyft took precautions and banned the passenger from its ride-share program as well.

“Driving in a pandemic is not easy. Please wear a mask, respect one another, and be a good person,” Lyft said in a tweeted statement.

A GoFundMe was created for the Uber driver, Subhakar Khadka, and received at least $30,000 in donations.

The woman posted an unapologetic video claiming her boyfriend taught her how to react the way she did.

The post Uber and Lyft Ban Passenger Who Assaulted Uber Driver appeared first on The Source.