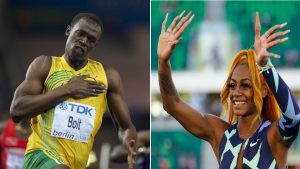 Sha’Carri recently returned to the track after her 30 day suspension for marijuana use that led to her missing the Olympics. The race was a Prefontaine Classic 100-meter dash with Jamaican sprinters Elaine Thompson-Herah, Shelly-Ann Fraser-Pryce and Shericka Jackson who finished top 3 in Tokyo.

Unfortunately it was a poor showing for Richardson as she came in dead last.

According to reports, Usain Bolt explained that her previous trash talking just made her Jamaican competitors more determined to beat her. Bolt added, “I would tell Sha’Carri to train harder and to be focused and not say too much… If you talk that big talk you have to back it up.

“So just train hard and focus on that and try to come back, do it and then talk about it.”

Hopefully Richardson can receive the message and take it and grow.

The Dallas native stated in a postrace interview with NBC, “This is one race. I’m not done. Count me out if you want to… Talk all the s— you want! ‘Cuz I’m here to stay. I’m not done. I’m the sixth-fastest woman in this game ever. Can’t nobody ever take that from me! Congratulations to the winners… But they’re not done seeing me yet!”