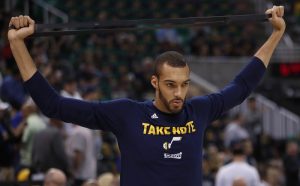 The Utah Jazz team flight made an emergency landing shortly after takeoff on Tuesday after it struck a flock of bids, resulting in enginge fire and failure.

ESPN reports the team was headed to Memphis to take on the Grizzlies on Wednesday when the flight mishap occured. The Jazz returned to the Salt Lake City International Airport shortly after takeoff with no injuries.

The team would depart Tuesday evening for their trip to Memphis. Players chimed in on the incident below.