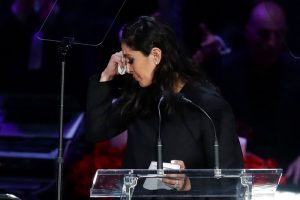 Vanessa Bryant and the families of the other victims of the helicopter crash reached a joint settlement in the lawsuit filed against the pilot and company over the fatal crash that took Kobe Bryant and his daughter, Gianna Bryant’s life.

Bryant and other families, along with the helicopter company and insurers, filed “joint notice of settlement and joint request to vacate discovery deadlines” in court Tuesday, per the report.

The terms of the settlement are confidential but they were seeking unspecified compensatory and punitive damages.

Vanessa Bryant and the families filed the lawsuit against Island Express Helicopters and pilot Ara Zobayan about a month after the accident.

The suit alleged that Zobayan failed “to use ordinary care in piloting the subject aircraft.”

Bryant alleged in her lawsuit that the helicopter company “authorized, directed and/or permitted a flight with full knowledge that the subject helicopter was flying into unsafe weather conditions,” and that the victims died “as a direct result of the negligent conduct of Zobayan.”

Hopefully this settlement helps Vanessa Bryant and the other families with their healing process.

The post Vanessa Bryant Reached Settlement For Wrongful Death Lawsuit With Company in Helicopter Crash appeared first on The Source.