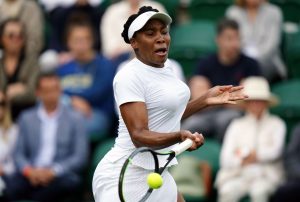 This marks Williams’ first Wimbledon victory since 2018. “You can’t win them all. Life is about how you handle challenges. Each point is a challenge on the court. No one gives you anything,” said Williams. “I like to think I handle my challenges well.”

In 2019, Venus spoke about the struggles she faced after being diagnosed with Sjorgen’s syndrome a decade ago.

“Unfortunately, that’s typical of people with autoimmune disease,” Williams said in a 2019 interview with Prevention. “They’re misdiagnosed or too sick to function. I literally had professional tennis taken away from me before I got the right diagnosis.”

There is no cure for Sjogren’s syndrome. “So you can imagine, it has definitely affected my game,” she told the outlet.

Venus Williams was forced to pull out of the 2011 U.S. Open and focus on her health.

The post Venus Williams Advances To Second Round After Earning 90th Wimbledon Win appeared first on The Source.