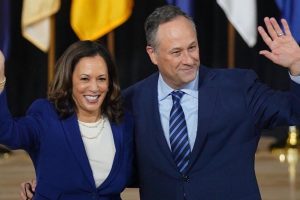 With the Round of 64 set to kick off in both the Men’s and Women’s NCAA Division 1 Basketball Tournament, everyone is filling out their brackets. That includes Vice President Kamala Harris and Second Gentleman Douglas Emhoff.

Second Gentleman Emhoff hit Twitter to let everyone know he is making sure he is getting his brackets filled, which his MVP Harris asked who was his pick.

In the men’s bracket, Emhoff selected Gonzaga, Michigan, Houston, and North Carolina in the Final Four with the Zags completing an undefeated season. On the women’s side, he selected Stanford, UCONN, Rutgers, and UCLA with Stanford taking the crown.

You can see the full bracket below.