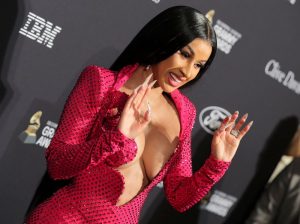 Fans are gearing up for the highly-anticipated ninth installment of the Fast and Furious franchise. Cardi B is in F9 and Vin Diesel shared that she was such an asset that she will return for the next installment.

“We are very much excited to evolve her character and to expand it to the finale. She made it just in time. She came in “Fast 9” just in time,” Entertainment Tonight reported the actor said.

Vin Diesel wasn’t the only one praising Cardi B’s performance. Director Justin Lin had nothing but nice things to say about the rapper.

“I love Cardi, you know? I mean, it’s amazing she showed up and within a minute she’s part of the family, right? And I love how when I got together with her, her and Vin were talking about the character because she’s actually really embedded into the overall universe, she’s been around for a long time and this is just the first time we are seeing her, so I’m really excited to explore that character of her. I’ll work with her any day.”

Cardi previously expressed her excitement to join the long-standing franchise. “Vin Diesel reached out and he was talking about a role. And I’m like it’s freaking “Fast & Furious,” get me there, put me on a plane. I remember when I saw Ludacris in ‘Fast & Furious’…when I saw Tego Calderón then to see Don Omar, it makes the hood have hope. Being around Vin, he’s just so nice, so dope. He makes you feel so comfortable. I’m just so excited,” she said.

The post Vin Diesel Confirms Cardi B Will Return To ‘Fast & Furious’ Franchise For ‘F10’ in 2022 appeared first on The Source.