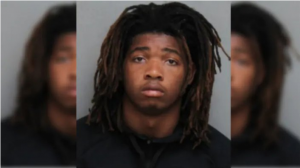 Several reports have confirmed that a suspended Virginia Tech football player is facing murder charges after beating a transgender man to death who posed as a woman on Tinder.

Isimemen David Etute was charged with second-degree murder for punching and stomping Jerry Paul Smith, who was found dead with missing teeth, several skull fractures and every bone in his face broken. The VT player reportedly admitted to police that he punched Smith five times and stomped on him after learning that the person that he met on Tinder with whom he had a sexual encounter, was actually a man.

Etute said that he went to Smith’s apartment on April 10, who he knew then as “Angie”, and had a sexual encounter under the impression that he was a woman. His lawyer, Jimmy Turk, contends that Smith solicited Etute for sex.

“Nobody deserves to die, but I don’t mind saying don’t pretend you are something that you are not,” Turk said. “Don’t target or lure anyone under that perception. That’s just wrong.”

Etute was released on $75,000 bond and placed on house arrest pending trial.

The post Virginia Tech Football Player Kills Transgender Tinder Date After Finding Out He Was A Man appeared first on The Source.