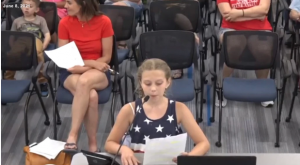 A now viral video shows a nine year old girl reading a scathing letter at a Minnesota school board meeting, demanding that the school take down all Black Lives Matter posters as it violates the school’s “no politics in school” rule.

The girl, who only identified herself as “Novalee”, said she was “so mad” at seeing the BLM posters in the hallways at school.

“The other day, I was walking down the hallway at Lakeville Elementary School to give a teacher a retiring gift,” she said. “I looked up onto the wall and a BLM poster and an Amanda Gorman poster. In case you don’t know who that chick is, she’s some girl who did a poem at Biden’s so-called inauguration. I was so mad.”

The post [WATCH] 9-Year-Old Girl Demands BLM Posters Be Taken Down At School Board Meeting appeared first on The Source.