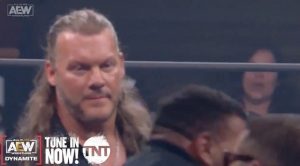 Chris Jericho was going about his business, enjoying live fans again and then one rushed the ring and he had to lay him out.

During All Elite Wrestling’s Dynamatie program, Jericho was being serenaded by returning fans in Miami’s James J. Knight Center. As he entered the ring for a face-off with Maxwell Jacob Friedman, a fan attempted to rush the ring. Not only was the fan met by security, but he was also on the receiving end of a Jericho right hand.

Note to fans, chill out. You can see the moment below.