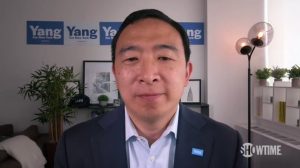 It’s no secret that many politicians pander for the Black vote but Andrew Yang is learning the hard way that a little research goes a long way.

The New York City mayoral candidate found himself in an awkward situation when he claimed to be a fan of JAY-Z’s music and was asked to name his favorite song and couldn’t.

Ziwe Fumudoh had Andrew Yang on a recent episode of Ziwe and asked, ”Do you listen to rap music by the way?”

Yang could’ve been honest and simply responded no but he was reaching for cool points when he responded, “I listened to a lot of hip-hop during like the ‘90s and 2000s,” to which the host asked “like what Andrew I gotta know.” Then he name-dropped the most recognizable names he can think of: JAY-Z and Nas.

He was asked to name his favorite Hov song and Yang took a pregnant pause but ultimately asked the question back. “What is my favorite Jay-Z song?” he nervously asked.

Yang took the easy way out and named JAY-Z’s collaboration with Linkin Park “Numb/Encore” and “N***as in Paris,” which he referred to as “Ninjas In Paris, as he should.

Although Andrew Yang gave JAY-Z a shoutout, the Brooklyn native followed in the footsteps of Diddy and Nas and endorsed former CitiGroup CEO Ray McGuire for Mayor.

“New York is in a state of emergency,” Diddy said. “This is my endorsement for Ray. Through those 30 years, wherever we were at, Ray was always talking about the people. We have the power to light this up.”

The post Watch Andrew Yang Struggle To Name Favorite JAY-Z Song After Claiming He Listened to ‘A Lot’ of ‘JAY-Z’ appeared first on The Source.