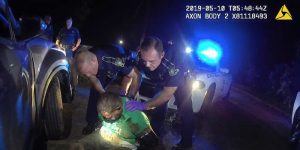 After 2 years of questions about the death of motorist Ronald Greene, shocking video footage of his arrest has been leaked to the public. Beaten, shackled, tased and dragged by Louisiana state troopers, Greene desperately tried to roll his bloody body over in a struggle to breathe but was ordered to stay on his belly. At one point Greene shouted, ‘I’m scared!”
A long-secret autopsy report cited Greene’s head injuries and the way he was restrained as factors in his 2019 death. Troopers reported Greene died on impact from his collision. They didn’t mention the brutal beating. The report noted he had high levels of cocaine and alcohol in his system as well as a broken breastbone and a torn aorta.

Trooper Chris Hollingsworth can be heard telling a fellow officer in the newly obtained batch of video that he beat Greene, “choked him and everything else trying to get him under control,”

“All of a sudden he just went limp. … I thought he was dead,” Hollingsworth said.

“You all got that on bodycam?” the other officer asks over the phone, at which point Hollingsworth switches his camera off.

Video shows officers repeatedly jolting the 49-year-old unarmed man with stun guns, putting him in a chokehold, punching him in the head and dragging him by his ankle shackles. They left the big framed Greene facedown on the ground with his hands and feet restrained for more than nine minutes.

At one point in a new 30-minute video, Greene can be seen struggling to prop himself up on his side.

York then kneels on Greene’s back and tells him again, “You better lay on your f—— belly like I told you to! You understand?”

Watch the shocking video below.

The post [WATCH] Another One! Shocking Footage Released Of Ronald Greene’s Fatal Arrest appeared first on The Source.