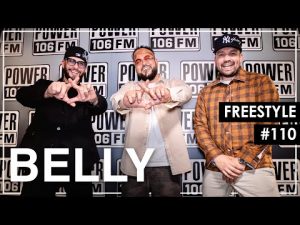 The L.A. Leakers freestyles have been on FIRE. Following visits from Migos, J. Cole, and Polo G, Belly steps into the beat to float all over the “If I Ruled the World” beat from Nas’ It Was Written album.

The visit to the Leakers was the third time that Belly visited the squad and he doesn’t miss.

Back in April, Belly dropped off two new singles in “Money on the Table” featuring Benny The Butcher and “IYKYK,” both from his forthcoming album See You Next Wednesday, set to drop on XO Records and Roc Nation.

“This felt like something nostalgic when I first made it, and being a fan of Benny, it only made sense to have him on it. I just feel blessed to be back & doing what I love.” Belly said of “Money on the Table.”

You can hear those singles here.

The post [WATCH] Belly Hits the L.A. Leakers and Spits on Nas’ “If I Ruled the World” appeared first on The Source.