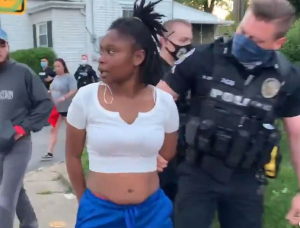 According to a report from TMZ, a group of protesters who were rallying against the failure to prosecute the cops who killed 26-year-old EMT first responder Breonna Taylor were arrested near Churchill Downs, where the Kentucky Derby was being held. According to the report, the Louisville Police Department will not offer the reason as to why the protesters were arrested.

Marchers protested by the entrance of Churchill Downs with signs that read, “We haven’t forgotten Breonna.”

The marchers eventually made their way to La Chasse restaurant, where a man dining at the restaurant pulled out a gun and continuously waved it at the protesters. When the police came, the man who pulled out the weapon was cleared, but three protesters were chased down and arrested.

When TMZ contacted the Louisville PD and asked why the protesters were arrested, they wouldn’t say but told them to file a public records request.

The post [WATCH] Breonna Taylor Protesters Arrested At Kentucky Derby, Diner Patron Who Points Gun At Them Cleared By Cops appeared first on The Source.