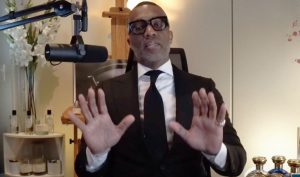 In an exclusive interview with DJ Vlad, famed relationship advisor Kevin Samuels addresses a viral video of a man sleeping in bed during one of his sessions. Samuels also called out the LGBTQ community to allow him and other straight me to be gay bashed, but added that even his critics wouldn’t believe he was gay.

See the interview below.