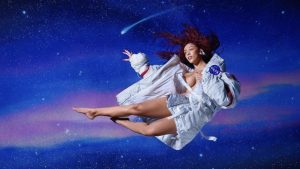 Doja Cat delivered on her promise to release new music this week. The LA native dropped her single Need To Know, along with a visual June 11. The muic video gave us an inside look at “Planet Her”

The recenlty released song is apart of her upcoming album Planet Her. The LP is packed with 14 songs and 5 features. Artists included in the album are Young Thug, Ariana Grande, The Weeknd, JID, and SZA. The lp will be available on June 25.

Fans were anticipating new music from the rapper and quickly took to Twitter once they got a chance to listen. Here’s what some of them were saying.

“NO BECAUSE NO BECAUSE NEED TO KNOW BY DOJA CAT SO FUCKING GOOD OH MY GOD” wrote gottaluvabi.

” Need to Know by Doja Cat already told me that this album is about to fuckin hit when it comes out” write Sorry_Tasean.

The post Watch: Doja Cat Takes Us To Outer Space In New Music Video appeared first on The Source.