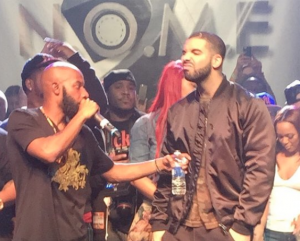 At a recent URL NOME XI event, Drake made appearance and was even slated to host the event, but instead announced that as a fan of battle rap, he would be adding an additional $50,000 to the existing $100K cash prize.

Drake reached into his pockets and pulled out fifty racks, adding, “I know I said a hundred but… I had to sweeten the pot.” Reports stated that Rum Nitty and Geechi Gotti, the two rappers going head to head, split the $150K prize between themselves.