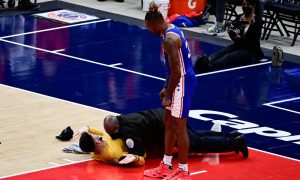 The fans are completely out of control. In New York, a fan spits on Trae Young, which was preceded by popcorn being thrown on Russell Westbrook, and over the weekend a fan threw a bottle at Kyrie Irving. The latest event happened in Washington where a fan ran onto the court and jumped to slap the bottom of the backboard.

At Capital One Arena, the Wizards were on a fast break during the third quarter as the man ran on the court. He was quickly tackled by a security guard, escorted from the floor, and arrested.

Already the subject of fan interaction earlier in the week, Westbrook was not thrilled with the moment.

“This is not a game or some s— you can just do whatever you want to do and run around,” Westbrook said to ESPN. “This is our job, and we take our job very seriously.”

His teammate Bradley Beal added, “There’s no place in the game for it.”

“I don’t know the law,” Wizards coach Scott Brooks said. “But I just know you shouldn’t be able to do that and get away with it and just be kicked out because we all know you can dress different and look different and get into an arena.”

The post [WATCH] Fan Runs On Court During Wizards-Sixers Playoff Game appeared first on The Source.