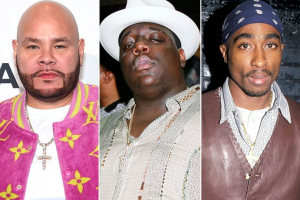 With the release of Netflix’s Biggie documentary I Got A Story To Tell, more revelations about the King Of New York and now Fat Joe unveils even more on his IG Live show with Swizz Beatz and Tmbaland.

In the chop up, Fat Joe revealed that he recorded five songs with Biggie and they were aiming with Tupac Shakur in the crosshairs. Crack admits that in the interim, he’s glad that they never came out.

“I’ma keep it real – at the time, we were dissing 2Pac a lot and all that and so that should have never seen the light of day,” Joe says. “Which is respectfully so, because you know they both passed on.”

The post [WATCH] Fat Joe Reveals He Made Unreleased Songs With Biggie Dissing Tupac appeared first on The Source.