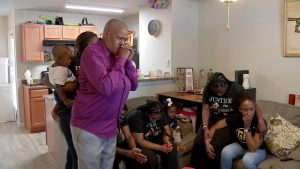 The Floyd family gathered like much of America to watch the verdict for Derek Chauvin, the former Minneapolis police officer who killed their family member, George Floyd.

In a video from a gathering of family and attorneys, the Floyd family celebrated each of the three guilty verdicts placed on Chauvin.

“I feel relieved,” George’s brother, Philonise Floyd, said at a Tuesday news conference. “A lot of days I prayed and I hoped and I was speaking everything into existence. I said, ‘I have faith that he will be convicted.’”

“You have the cameras all around the world to see and show what happened to my brother,” Philonise said. “It was a motion picture — the world seeing his life being extinguished. And I could do nothing but watch — especially in that courtroom.”