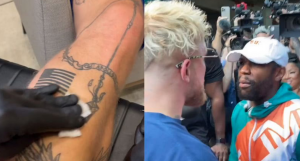 If the upcoming Floyd Mayweather vs. Jake Paul match didn’t need any more publicity, the YouTuber and celebrity boxer is definitely maxing out on the exposure after he decided to get a “gotcha hat” tattoo following his pre-fight scuffle with Mayweather.

After giving an attention-seeking apology following the rift earlier this week, Paul decided to permanently etch this moment in history into his own skin with a tatt on the knee yesterday.

Paul is also reportedly selling “gotcha hat” merch to further get under Mayweather’s skin as well as capitalize off what is probably the biggest moment in his career.