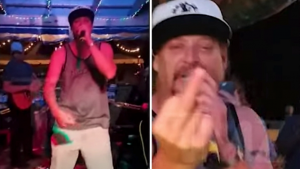 Well, if Kid Rock tells you to not to record him, then you’d better listen.

The patrons at Tennessee’s FishLipz Bar & Grill didn’t oblige to the request and got an earful from the rap/rock icon, who yelled, “F*** your iPhone, yeah,” before pointing at his crotch and saying, “You f****** f*****s with your iPhones out.”

A bunch of fifty year olds might not know how to take that, Kid.