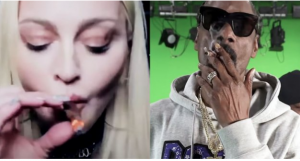 Madonna and Snoop Dogg? Smoking out in a music video??

Snoop recently debuted his “Gang Signs” video with Mozzy from his 18th album From Tha Streets 2 Tha Suites and in the song the Doggfather name drops the “Material Girl”, who pops in front of the camera when Snoop raps, “passing joints to Madonna..”

Madonna even plugged her appearance in the Gang Signs video on Twitter, tweeting, “Was so much fun to show up in @SnoopDogg video for his new song Gang Signs!”

In the same song, Snoop even suggests that he’s smoked with a POTUS, spitting, “Still sippin’ gin and juice while I’m smoking marijuana / I bet you never blew with Obama..”

Maybe Obama will be making his appearance in Snoop’s next video.