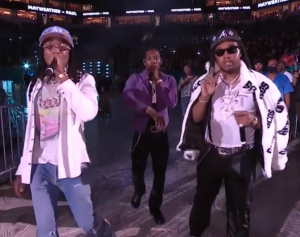 The introduction to the main event of Mayweather and Paul just needed a little bit of “Straightenin.” Migos hit the Miami Gardens to perform their new single ahead of Mayweather’s ring walk.

If that wasn’t enough, Money Mayweather doubled down on the performances by having Moneybagg Yo perform “Time Today” as he made his way to the ring.

Ain’t Nun But A Lil Of Straightenin!!! @floydmayweather Migo Gang In The Building! #Culture3 FRIDAY!!! 6/11 @migos,” Quavo wrote on Instagram.

As he mentioned, Culture 3 will drop Friday. You can also tap into Moneybagg’s new album, A Gangsta’s Pain, which currently is holding down the Billboard 200.

You can see both performances here and here.

The post [WATCH] Migos and Moneybagg Yo Perform Before Mayweather-Paul Fight appeared first on The Source.