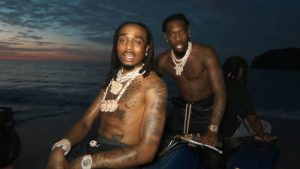 Migos are continuing to plug Culture 3 with the release of a video for “Why Not.”

The new visual is directed by Wyatt Winfrey and shows the superstar trio taking a trip to Jamiaca and enjoying the beach and ATVs.

The Drake-assisted single is “Having Our Way,” which is grabbing headlines due to Quavo seemingly addressing taking back the Bentley he gifted Saweetie.

“She had it her way, now she out of a Bentley,” Quavo rapped.

Earlier this year, fans wondered if he took his gift back following their messy breakup. Although the rumors were denied, Quavo’s newest rap verse has people thinking there might be truth to those speculations. “Lil’ bitty b*tch, she slimy, she sneaky/I’m takin’ back that Bentley” Quavo rapped in the previewed track.

Recently, Saweetie released her “Pretty Btch Summer” playlist, a prelude to her upcoming debut album, Pretty Btch Music. The rapper shines a light on upcoming artists Lourdiz, Kendra Jae, Drakeo The Ruler, and more. On one of the tracks on the EP titled “See Saw” Saweetie seems to throw some shots at her ex-lover, where she re-addresses the cheating accusations she originally brought up on Twitter.

“Feelin’ dangerous, I thought you was my anchor,” she begins in the second verse. “But you ain’t sht and on some real sht, tell me what the problem is/Say he gon’ do better but it’s always just the opposite/How you fumble the baddest btch, are you a dumb ngga? You got nerve selling me all these threats when you wrong, that’s a big trigger/How you figure? Ain’t the woman that you thought? You was humpin’ thots, fckin’ narcissist, you just mad you got caught.”

You can hear that song below.

The post [WATCH] Migos Hit Jamaica in New Video “Why Not” appeared first on The Source.