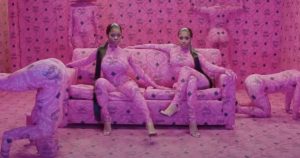 Missy Elliot steps into the directorial chair with “Twerkulator.”

City Girls released a visual to their hit song “Twerkulator.” The music video opens with viewers hearing Missy declare, “This is an emergency. This is not a test. Everyone, please take shelter immediately! The Twerkulators have already invaded Twerk City, and you don’t have much time. They’ve already landed, and they’re taking over. Run for cover, motherf*ckers!”

“Thank you @MissyElliott it was a pleasure.” wrote Yung Miami.

“@YungMiami305 & @ThegirlJT@QCMusicMgmt I am So Humbly Grateful for the opportunity to work on the Twerkulator video. They WORKED HARD & rehearsed from 11 am to 11pm. They was probably SO OVER ME saying Let’s Go erday but they said we will do it. Thank yall!” wrote Missy Elliot.

The song samples “Planet Rock” by Afrika Bambaataa & the Soulsonic Force, and TikTok got a hold of the infectious song. Specifically JT’s verse which provides the instructions for the dance challenge.

What are your thoughts?