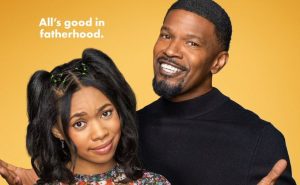 Jamie Foxx is set to return to TV as Netflix has revealed the trailer for his forthcoming series, Dad Stop Embarrassing Me!.

In the new series, Brian Dixon (Jamie Foxx), successful business owner and bachelor, just unexpectedly became a full-time father to his teenage daughter Sasha (Kyla-Drew). Determined to turn over a new leaf, Brian’s going to need all the help he can get from his dad (David Alan Grier) and sister (Porscha Coleman) — and Sasha’s going to need all the help she can get learning how to fit into her new, lovingly imperfect home. Full of heart and humor, Dad Stop Embarrassing Me! is inspired by Foxx’s real-life relationship with daughter Corinne Foxx, who also serves as executive producer. The multi-cam sitcom reunites Foxx with showrunner Bentley Kyle Evans (The Jamie Foxx Show) and is directed by Ken Whittingham (black-ish).

You can see the trailer below.