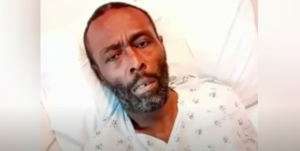 A video of rapper Black Rob in the hospital appeared on social media over the weekend and fans are worried about his health.

The exact cause of his hospitalization has not been revealed yet. Fans learned about Black Rob’s condition after  DJ Self posted a video of him on his Instagram. He asked his followers and fans to pray for the rapper. He captioned the video as: “Let keep our prayers up Black Rob !!! Get well man Please people out there take care of yourself BR was one of the greats Had NY on his back like Whaooo.”
In the video, Black Rob says, “I don’t know, the pain is crazy, man. It’s helping me out though, it’s making me realize I got a lot to go.” He also spoke about rapper DMX who passed on April 9. He said: “I feel everything about X. X was positive. Love to X.”
Let’s keep Black Rob lifted in prayer. It’s already been a rough year for hip hop.