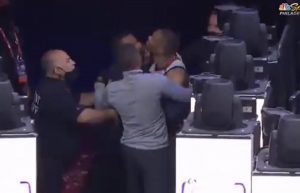 Russell Westbrook suffered an injury during Game 2 of the Washington Wizards series with the Philadelphia 76ers. As he exited the arena and headed for the locker room, a fan tossed popcorn on him.

When he noticed the popcorn, Westbrook became incensed and attempted to return to the arena but was held back by security and team personnel.

“I wouldn’t come up to me on the street and throw popcorn on my head, because you know what happens,” Westbrook said. “In these arenas, you gotta start protecting the players. We’ll see what the NBA does.”

Valerie Camillo, the President of Business Operations at the Wells Fargo Center, issued a statement following the game: “This was classless, unacceptable behavior, and we’re not going to tolerate it at Wells Fargo Center. We’re proud to have the most passionate fans in the country and the best home-court and home-ice advantage around, but this tpe of behavior has no place in our arena.”

The fan was located and escorted out the arena. You can see the moment below.

The post [WATCH] Russell Westbrook Held Back by Security After Fan Throws Popcorn at Him appeared first on The Source.