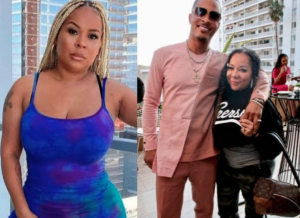 In an exclusive interview with Hollywood Unlocked with Jason Lee, T.I. and Tiny former friend and alleged sexual assault victim Sabrina Peterson is now alleging that she was told by a Grand Hustle artist that T.I. paid him $25,000 to kill her in the midst of her allegations against him and his wife.

Around the 28-minute mark of the below video, Peterson describes the circumstances under which she was informed of the alleged hit, which she said she was told about not long before she was released from prison. “Maybe like right when I came home from prison, he was laughing… He was like, ‘You know that n***a tried to pay me to kill you?’”

See the entire interview below.

Last month, Peterson said that she would drop the lawsuit against the Harrises if they apologized to her within a week of her IG request. The request went unanswered and this appears to be Peterson’s next claim to be heard in court.