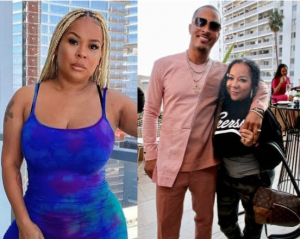 Allegations of sexual abuse and rape have been thrown at Hip Hop couple T.I. and Tiny since March, where at least 30 women have accused the celebrity couple of drugging and raping them. 17 women have actually come forward and pressed charges and the woman who set off the stream of accusations is the couple’s former friend Sabrina Peterson.

Back in January, Peterson posted an allegation on IG, claiming that T.I. put a gun to her head. Peterson also publicized several other allegations from alleged victims on IG who claim T.I. and Tiny drugged them and forced or coerced them into sex, which further complicated the situation for the famous duo. Earlier this month, the Los Angeles County Prosecutor’s Office has confirmed that they have officially opened up an investigation into the claims against T.I. and Tiny.

Peterson has now come forth with a video saying that if Clifford and Tameka Harris(T.I. and Tiny) apologize to her per the allegations within seven days, she will immediately drop the lawsuit against the couple.

In light of allegations, VH1 has halted production on the couple’s reality show, T.I. & Tiny: Friends & Family Hustle. Marvel also dropped T.I. from his role in the upcoming Ant-Man and the Wasp movie.

The post [WATCH] Sabrina Peterson Says She’ll Drop Lawsuit Against T.I. And Tiny If They Apologize Within A Week appeared first on The Source.