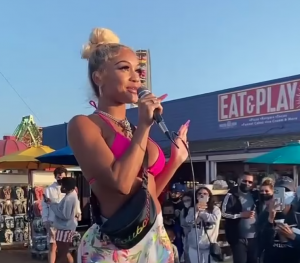 While Quavo and Saweetie’s messy break-up made headlines all across the blogosphere, the events that followed since the two rappers split are really what a good teenage love movie are made of. Now, the L.A. songstress has taken it all the way back to the streets after she posted up in L.A. to perform and had a donation jar on deck to let you know she meant business.

Promoting her latest single “Fast(Motion)”, The “My Type” rapper took to Los Angeles’ Santa Monica Pier and performed a couple of songs while reminding those who stopped to listen that “rent was dueee..” The donation cup and hand written sign just added to the authenticity.

Saweetie even took her street performance to social media with the hashtag #fastmotion.

The post [WATCH] Saweetie Hawks For Donations During L.A. Street Performance appeared first on The Source.