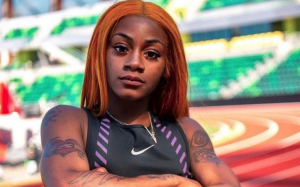 As previously reported, U.S. Olympic hopeful Sha’Carri Richardson was disqualified from the 2021 Olympics in Tokyo after testing positive for marijuana. The 21-year-old track star appeared this morning (July 2) on The Today Show, admitting that the death of her mother, who passed away shortly before her win in the Olympic trials, caused her to turn to marijuana as a coping mechanism.

The Olympic-bound runner said, “I want to take responsibility for my actions, I know what I did. I know what I’m supposed to do, [what] I’m allowed not to do and I still made that decision. Don’t judge me because I am human.”

Richardson has received a 30-day suspension for her infraction, so she will miss the 100m race in Tokyo, but a decision has yet to be made as to whether or not Richardson will run in the 400m relay for the U.S.

The post [WATCH] Sha’Carri Richardson Says She Picked Up Marijuana After Mother’s Death appeared first on The Source.