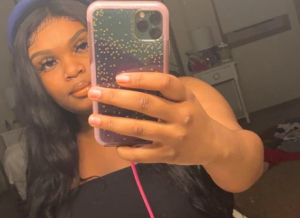 Darnella Frazier is the 17-year-old girl who recorded the infamous video of Derek Chauvin pressing his knee on George Floyd’s neck for nearly 10 minutes. Honored and respected for her bravery, this young lady revealed the excessively dark and ugly side of police brutality.

Frazier had been taking her 9-year-old cousin to Cup Foods last Memorial Day when she saw police officers holding Floyd on the asphalt near the rear of a police vehicle, a scene she described during her testimony as that of “a man terrified, scared, begging for his life.” Police said they were responding to forgery in progress which resulted in Floyd’s murder.

She sent her cousin inside the store and began filming. The 10-minute video she posted to Facebook has since been seen by the world and became a key piece of evidence in Chauvin’s trial.

Showing a courageous spirit, Frazier testified during the trial that she has spent nights apologizing to Floyd for “not doing more.”

“When I look at George Floyd, I look at my dad, my brothers, my cousins, my uncles, because they are all Black,” Frazier said from the witness stand. “I look at how that could have been one of them. But, she said, “it’s not what I should have done. It’s what he (Chauvin) should have done.”

My heart goes out to George Floyd’s family!

Although no amount of charges will bring back a loved one, justice was served and his murderer will pay the price. We did it

Frazier received the 2020 PEN/Benenson Courage Award from ‘Do the Right Thing’ director Spike Lee. The teen is reportedly focused on her schooling at the moment and is looking forward to attending college, according to a statement issued by PEN America.

We salute this young lady for her revolutionary moment in history and uplift her for all her future endeavors.

The post [WATCH] The 17-Year Old Who Recorded George Floyd’s Murder For The World To See appeared first on The Source.