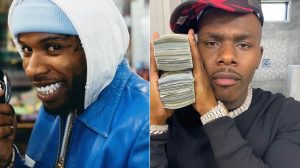 Tory Lanez and DaBaby link up for an energetic collaboration with “SKAT.”

Initially there was some doubt that “SKAT” would actually be released stemming from the controversy involving Houston rapper Megan Thee Stallion. When Lanez announced the song title and collaboration with DaBaby back in January, he received heavy online backlash. We’re all familiar with Meg’s accounts of her being shot in the foot by Tory last summer. Currently Lanez has pled not guilty to the charges and has continued to publicly deny involvement in Thee Stallion’s accusations. However some of her fans were still displeased with the Canadian rapper joining forces with her frequent collaborator, DaBaby. Thus leading Megan to weigh in unbothered on Twitter stating, “That sh*t was old and not cleared.”

But today Tory Lanez delivered the video all cleared.

The “SKAT” release follows Tory’s 12 track R&B project Playboy, which was released in March of 2021. Playboy spawned the emotional single “Feels” with Chris Brown, as the only featured collaboration.

Tory Lanez and DaBaby are known for bringing out of the ordinary visuals and “SKAT” is no different. On the scale of fun and catchy the video falls right at the top. Both artists actually stand out playing multiple character personas in the video.

Watch all the fun antics below in the visual for “SKAT” where Tory Lanez re-enacts Pinky’s character from the cult classic Next Friday to embody a young Michael Jackson’s aesthetic in the iconic “Thriller” video. While DaBaby is seen flexing as a boxer, priest and police officer. All while firing off his usual aggressive cadence trading bars with Tory over a victorious Nils & Foreign Tek production. “SKAT” is directed by Christian Breslauer.

“I ain’t got time for two things, what?

These stupid a** h**s and they feelings, ayy (Okay)

All independent, my b***ches just call and they get it

They know that this ballin’ authentic (Okay)

Chocolate vanilla get hot so I hopped out the dealer

I copped a new car and I tint it (Okay)”

The post [WATCH] Tory Lanez and DaBaby Link Up For “SKAT” appeared first on The Source.