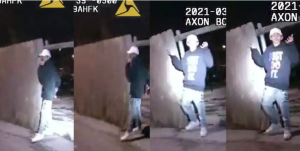 In the midst of the country’s worst history of police-community relations, a 13-year-old was shot and killed by Chicago Police and now the graphic footage of the teenager’s killing has been released to the public.

The Civilian Office of Police Accountability (COPA) released the now viral footage of the fatal shooting of Adam Toledo on March 29, which ends with the young teen getting shot in his chest by a Chicago Police officer with his hands in the air.

Chicago Mayor Lori Lightfoot gave a statement on the shooting death, saying, “As more people see this footage, I want to ask that everyone tuning in right now think first and foremost of Adam Toledo and what his family is enduring every single day since they’ve learned of his passing.”

The footage is graphic and parental discretion is advised.

See the entire video uploaded by the Civilian Office of Police Accountability HERE.