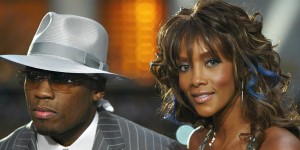 Vivica A. Fox and 50 Cent haven’t been an item since 2003 but that doesn’t mean the Power creator still doesn’t hold a place in her heart. During a chat with VLAD TV, the superstar actress revealed that he is still the love of her life and why their relationship ended.

“We met after he said the thing at the Soul Train Music Awards. ‘And I want to thank Vivica Fox for wearing that dress,’” Fox spoke of the start of their romance. “I was shocked. I was just kinda like, wow. And then after that, his people got in touch with my people and next thing I know, we were on the phone and my birthday was coming up and he’s such a gentleman. He’s very generous. I know him as Curtis, always will, and the 50 Cent, those are his performing things and who he is as a man. So, I met Curtis.”

Although their relationship is over, Fox states that love still exists and says “he was the love of my life.”

You can hear it from Fox below.

The post [WATCH] Vivica A. Fox Says 50 Cent Was “The Love of My Life” appeared first on The Source.