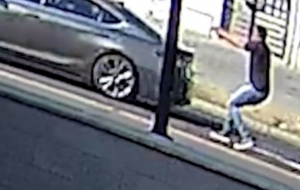 In a very shocking, but now viral video, a woman with two small children was injured after being shot in the shoulder during a road rage incident in the country’s capital.

Bumper to bumper traffic caused a woman with her two small children in the back seat to change lanes, which cut off a silver Maserati on Eastern Avenue in the Northeast section of D.C. This obviously didn’t sit well with the driver of the Maserati, who jumped out of his car and began firing, pumping three bullets into the woman’s car, with one of the bullets striking her in the shoulder.

Neither of the children were harmed in the shooting.

Police have not apprehended the suspect and are offering a reward of up to $10,000 for information that leads to an arrest and conviction in this case.

The post [WATCH] Woman Driving With Two Children Shot In Road Rage Incident In D.C. appeared first on The Source.