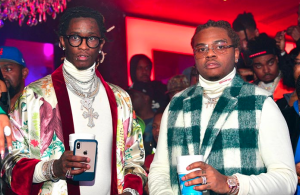 According to Atlanta’s WSB-TV, ATL natives Young Thug and Gunna freed 30 inmates from the Fulton County Jail yesterday in their hometown after paying bonds for those with low level offenses.

Thugger told the station, This is where we are from. We just woke up and went to the jail with the lawyer and you know DA’s and the prosecutors, you know, the bonding companies and just got as many people as we can out.”

Gunna also added, “You never know what somebody been through. There was people sitting out three or four years and couldn’t get out on a bond.”

The post [WATCH] Young Thug and Gunna Bail Out 30 People At Fulton County Jail appeared first on The Source.