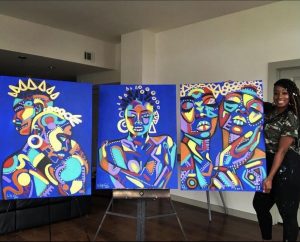 In the words of Erykah Badu, “I’m an artist and I’m sensitive about my sh*t. Those words hold true to almost any artist. Each artistic offering is a form of expressive bravery. The vulnerable aesthetic that lies within each artistic offering not only shines, but tells a beautiful story that potentially heals the mind, body and soul. For visual artists like Whitney Austin, that is just the tip of the iceberg.

Although she was aware of her talent at a young age, it was not until an unanticipated lost before she would pick up a paint brush again as an adult.

“My grandfather passed away unexpectedly,” she says. “It’s not like we saw him slowly decline. He had a heart attack.”

Following the sudden loss, she was inspired to honor her grandfather with a portrait. Austin notes that many of her closest friends were completely unaware of her artistic gifts because she had not shown any sight of her natural ability in over 10 years.

While growing up, there were no full-time artists that she could tap for mentorship, nor did she see any notable African American artists.

She took a leap of faith after returning to form as an artist. At the same token, she understood that it would not be easy, but she was willing to do the necessary work. Although thoughts of doubt would resurface, it would serve as a motivational catalyst for the Ohio native. Her move back to Charlotte from Miami is where she would begin to be the change she wanted to see. Her first profitable pieces were portraits of Black women. Using social media as her marketing outlet, Austin would paint “whatever she wanted” and people would buy it.

“I started to take it serious when I saw the potential that it was really up to me,” she says. “Sometime we put too much emphasis on the world giving us the ‘OK’ or giving us the approval on an idea. No one is going to give you what your worth until you know your worth for yourself.

Whitney Austin begin to live by her very words. She raised the prices to her work and began to ascend in both quality and quantity. Her investment would lead her to quitting her day job as an senior caretaker.

“It’s was scary and still is scary to bet on yourself that much, but overall it was a great feeling.”

Her success as an entrepreneur and artist only proved that she made the right decision. In 2020, the world witnessed another death of an unarmed Black man, George Floyd. While battling a pandemic, the world stood still as Derek Chauvin, a white police officer assassinated Floyd by keeping his knew on his neck for 9 minutes and 29 seconds.

While processing, hurting and healing from the tragedy, Whitney Austin took to her paint brush and canvas.

“His story represents us (as Black people). For it to be so extreme I had to create painting with multiple views.”

Austin’s painting tells a story. At the center, we see George Floyd wearing a crown. On his shoulders, stands protestors. The bottom represents the civil unrest that sparked the number of riots throughout the 2020 Summer. Above Floyd’s George, are the countless Black men and women who were unjustly murdered. From Travon Martin to Breonna Taylor and more, Austin’s piece serves its purpose to heal from the trauma African Africans face.

As an entrepreneur, it is important to possess intangible Vitamins A-E. These are Action, Belief, Confidence, Discipline and Enthusiasm. Whitney Austin unequivocally possesses each of those qualities. Through art she heals with purpose.