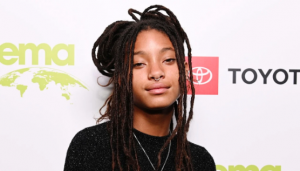 Over the years, fans of Willow Smith have watched the 20-year-old blossom into the woman that she is today. One thing Willow has always involved herself in is expressing herself creatively, whether that be by her hair, look, or music. From Whip My Hair to her most recent single, Transparent Soul, Willow Smith has proven her capabilities as a singer and performer.

In a recent interview with V magazine, Willow Smith opened up about her latest single, “Transparent Soul,” featuring Travis Barker and insight on what she has instore for her upcoming projects.

“I’m so excited that I’m going to be having a song on the album with Avril Lavigne. She is so iconic,” Willow mentioned. “From 13 to 16, she was my idol. It’s really nice to be able to have a quintessential pop-punk record with the pop-punk queen.”

While the “I Am Me” singer is expressing a new style to her music, Willow Smith explained that she wasn’t always supported for her taste in music over the years.

“Being a Black woman in the metal crowd is very, very different on top of the pressures that the music industry puts on you,” Willow shares. “Now, it’s like an added pressure of the metal culture, the metal world, and just rock in general. I used to get bullied in school for listening to Paramore and My Chemical Romance.”

“Just through the music that I’m putting out right now and the representation that I can bring to the mix,” she continued. “I just hope that the Black girls who are listening to my music and listening to this album see that there’s more of us out there. It’s a real thing, you’re not alone. You’re not the only Black girl who wishes she could flip her hair to the side, and wear black eyeliner, you know what I mean?”

We love to see it Willow!

The post Willow Smith Opens Up About Being Bullied for Enjoying Rock Bands appeared first on The Source.