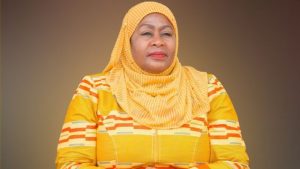 Friday marked a new chapter of leadership for women in Tanzania.
The first-ever female president, Samia Suluhu Hassan, took the oath of office after the death of Tanzanian President John Magufuli.
Hassan is now the first female leader of the East African nation since its independence from Britain in late 1961.

61-year-old Hassan was Magufuli’s vice president, first elected with him in 2015 and re-elected last year.  She will serve out the remaining four years of the late Magufuli’s term, which ends in October 2025.

Born in Zanzibar, she began her political career in 2000 with election to the Zanzibar House of Representative. She was immediately appointed minister of trade and tourism by then-President Amani Karume, becoming the only woman in a senior ministerial position in the Cabinet.

In 2010, Hassan won a seat in Tanzania’s national parliament. Her journey in national politics began in 2014, when she was selected by then-President Jakaya Kikwete as the country’s minister for union affairs.

Former Tanzania president Magufuli died Wednesday in a Dar es Salaam hospital, twenty days after his last public appearance.  The late president was rumored to be suffering from COVID-19, which he long denied was present in Tanzania.  However, Hassan said he died of heart failure.

While Hassan has taken the seat following the tragedy, the people of Tanzania are hopeful and proud of the new prospects of their first female leader.

We salute you queen Hassan and all the women that have paved the way for our future.