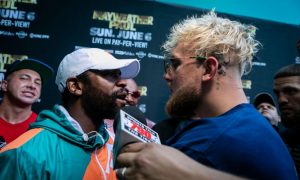 The love between a father and his daughter is unmatched. Yaya Mayweather aka Money Yaya is no stranger to using her social media to say what she has to say. This time, the 20-year-old mom is pointing her Instagram fingers at Jake Paul after his “Got your hat” stunt with Floyd Mayweather at the first press event for an upcoming boxing match.

The fight is scheduled to be held on June 6th between Paul’s brother, Logan, and the undefeated champ. Logan also is entering the ring with a winning streak in his first three fights as a professional boxer.

Following the altercation, Jake Paul claims that one of Mayweather’s bodyguards got him in the eye, causing him to have a black eye. Yaya Mayweather seems to believe otherwise, in a post to her Instagram story. “@Jakepaul wait you said who gave you a black eye???” the post read with a picture of Floyd striking Paul.

“Boy you done f*cked up your ass is going to be layed out on the canvas June 6th,” Yaya continued. While many think that the play was staged, others are amused by Paul’s audacity. Meanwhile, Paul took to his Twitter to say that “I stole his hat because he steals peoples money with boring fights,” he taunted.

Who do you have your money on for this upcoming fight? Check out the video below.