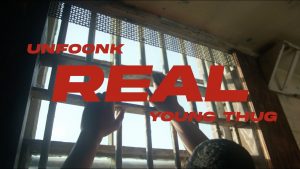 Over this past weekend, Young Thug and the Young Stoner life set shared their Slime Language 2 compilation. On it, Thug made a case for his budding roster, highlighting each signee adequately for the audiences at home.

Among them was Unfoonk, the rapper’s older brother whose “Real” collab with Thugger proved to be a standout effort on the project. On the introspective cut, Foonk reflects on his come up and Tuesday (April 20), the duo brought his narrative to life via the track’s official video.

The new clip, directed by NEVERPANIC, finds Foonk navigating his time in jail, his subsequent release, and Young Thug fulfilling his brotherly duties with a slot waiting for him at YSL.

“Real” sets up the argument for Unfoonk’s future among rap’s current class of street poets. Tapping into his melodic delivery, Foonk manages to artfully reel listeners into his trials. It’s safe to say that he has plenty more tales to offer. Notably, the Atlanta rapper spent 11 years in jail, gloriously returning home to a baby brother who had taken heed of his advice to turn to music rather than the streets.