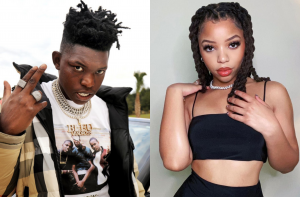 This time around the hyphenate took on Yung Bleu’s “You’re Mines Still” track and flipped it into a 1-minute response-style cover to the popular track.

“Quit blowing up my phone/Cause you’re not my mine still/We will never be again/You’re in denial,” she serenades in the clip.

Naturally, the outing was met with a slew of positive feedback. But, most notably, it was Yung Bleu who would offer his stamp of approval with a directive in tow.

“Ok, let’s do a song now,” the Alabama-bred rapper penned in response. The collaboration may very well actualize as Chloe responded with a cryptic eye emoji to the request. Time will just have to do what it does best.

“You’re Mines Still” has proven to be a breakout moment for the 25-year-old Bleu. The track originally existed as a solo outing . However, it was mediation from Demarcus Cousins that would eventually land Drake on the cut, sprinkling one of his star-making features to seal the deal for the talented upstart.

The track currently sits at the No. 19 spot on the Billboard Hot 100. Shout out to Boogie.