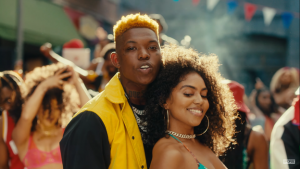 Yung Bleu has released the video for his new single “Baddest,” which features Chris Brown and 2 Chainz. The new Edgar Estevez-directed video follows the announcement of his debut album, Moon Boy, which is set for July 23.

In support of the forthcoming album, Yung Bleu has also announced the American Moon Boy tour. The 38-date cross-country tour will kick off on August 26 in Minneapolis with stops in major cities including Chicago, New York, Atlanta, Houston, Los Angeles, and more. Tickets go on sale this Friday, July 9, at 10 AM PT / 1 PM ET HERE. Yung Bleu will be joined by Ann Marie, Seddy Hendrix, and Noby on the road. You can see the full dates below.